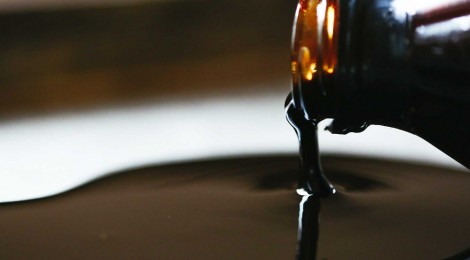 A couple of days ago I was preparing a quick meal for supper. I am sure we had something going on that night. Softball. Flag Football. Track. Something. Whatever we were going to eat needed to be quick. So I sprayed a casserole dish with some olive oil and laid out some salmon. I opened the cabinet and began to spin the Lazy Susan to find some seasoning to sprinkle over the fish before I put it in the oven.

As I spun the Lazy Susan around my eyes widened as I saw a layer of thick, oozy, dark brown goo spread out over the top shelf. I peered around until I saw the culprit. A jar of molasses with a lid halfway twisted on had been turned over onto its side. Jars and packets of spices were lodged in the goo.

I took a deep breath. Now, I suppose I could have found a spice I wanted, made supper, and left the mess to clean up later.

I am not too good at leaving things undone. Leaving messes for later.

If I notice the trash is full, I stop right then and there and empty it.

So, I DID find a spice I wanted, sprinkled it onto the salmon and put the salmon in the oven.

Then I stared at the molasses.

I took another deep breath.

I knew how this situation had probably happened.

I have a daughter who is a flurry of creativity. She is beautiful and kind and sweet…and driven. My word for her is TENACIOUS. When she was 3 and I had to care for her baby brother before I could respond to her requests I would always subsequently enter a room to find that she had just gone to do it herself…tasks sometimes inappropriate for her age. She is a force to be reckoned with…a fiery ball of ingenuity and determination. So when she cooks or paints or writes or whatever she does…she does it all the way…and sometimes…ahem…ALWAYS…leaves her mark on the space where she was working. We are working on this skillset…the skill of cleaning up after yourself.

So I called for my sweet girl to come see me in the kitchen. I calmly showed her the molasses, which she had used last. I also pointed out the general mess of the Lazy Susan. She was repentant. She offered to clean it up. I told her I wanted to do it. I sent her on her way.

After she walked away I started removing things from the shelf. With each item, I ran it under hot water until the sticky, hardened molasses softened and then washed away into the sink and down the drain. I put the items on the counter one by one.

I worked over the entire Lazy Susan…top and bottom shelf…far beyond the margins of the spilled molasses…until I had cleaned every square inch of the shelves and each spice jar.

I sighed with relief. That Lazy Susan had been filthy. It so needed to be cleaned. Thank God for spilled molasses. I don’t know WHEN I would have gotten around to cleaning that thing.

For sticky, brown goo. For things that get stuck in it.

I do know that so, so, so often…in the end…I am thankful for spilled molasses.

For the hot water that dissolves the sticky, hardened mess until it is softened and runs down the drain.

For cleaning that ends up taking place way beyond the margins of the original spill.

It is overwhelming at first sight. Frustrating. Frightening, even.

Especially if it is our own creative, active self…our own messy HUMANITY…that caused the spill in the first place.

But, I am still always so thankful for spilled molasses. Always.

Rarely at the beginning.

When something spills in the fridge and I end up cleaning everything out and then stand back and think: “Man, that looks good now. Clean. So glad I ended up needing to do that.”

At first sight I am angry, frustrated, and overwhelmed.

But in the end.

Don’t be afraid of the dark goo, friend.

The sigh of relief is coming. I promise.

← Let Me Do It
New Podcast: Unstuck →