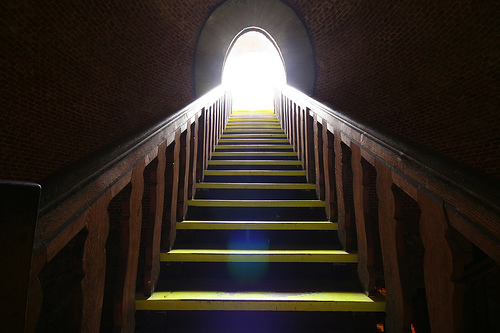 For nearly two thousand years the Sermon on the Mount in the Gospel of Matthew has captivated the hearts, minds, and imaginations of Christ followers everywhere. It has been affectionately referred to as “Jesus’ Manifesto” and “The Constitution of the Kingdom.” The sermon is the first extended teaching we hear from Jesus when reading the New Testament. The content of his preaching is so simple and yet profound that it has been nearly universally admired.

The power of the sermon strikes the reader from the very beginning as Jesus introduces His teaching with the distinctive rhythm of the Beatitudes, eight short declarations that introduce the Sermon, give the Sermon its structure, and turn our spiritual presuppositions upside down. It has been often noted that the Beatitudes form a series of steps. Each step is a logical result of the step that is before it.

The first beatitude is spiritual poverty. This is the starting point. Entering into the Kingdom begins with one’s realization that s/he is completely dependent upon God. The realization of one’s poverty results in a deep grief, which is the second step. This mourning brings about a natural meekness, which is the third step. Once we have realized our pitiful position, grieved over it, and been brought to meekness we begin to hunger and thirst for true righteousness. This is the fourth step. But true righteousness does not just simply seek punishment, it seeks mercy, which is the fifth step. When we desire mercy for people our motives are pure, and we find ourselves on the sixth step of the pure in heart. Once we have been purified from misplaced motives we are able to be peacemakers who restore relationships, which is the seventh step. If we are walking in these kingdom principles we can be confident that we will be persecuted for our actions. This brings us to the eighth and final step. Undoubtedly, our persecution will only heighten the first realization again. That is, that we are in fact helplessly dependent upon God. Thus, the steps begin again in what is an unending process in the life of the believer.

Given this constant, cyclical nature of walking with God the first step is absolutely critical in establishing the starting point for the spiritual seeker. In the first Beatitude Jesus declares, “Blessed are the poor in spirit, for theirs is the kingdom of heaven” (Matthew 5:3). In Jesus’ day this should not have been a shocking statement. After all, God had declared that He dwells with the lowly throughout the Old Testament (e.g. Psalms 51:17; Isaiah 66:1-2). Yet, this concept would prove to be a stumbling block to many of the Jews in Jesus’ day. Evidently some had come to rely on their knowledge and study of the Hebrew Bible. Spiritual poverty was seen as a sign of spiritual weakness, not a spiritual attribute. Yet, here is Jesus declaring that this is not only not a bad position, but a blessed position.

The great 19th century preacher, Charles Spurgeon, noted the appropriateness of this beginning point. He remarked, “A ladder, if it is to be of any use, must have its first step near the ground, or feeble climbers will never be able to mount it.” Is there any lower position for the human soul than the overwhelming realization that s/he is absolutely spiritually bankrupt? The answer, of course, is no. And there is also no position more greatly blessed.

A giant step at the bottom of the ladder would have been understandable, but it would have prevented many from even attempting the ascent. Instead, the stumbling block here is not a lack of human ability, but a lack of humility. Only the soul who has recognized that s/he is helplessly dependent on God can set foot on the first step of this ladder. The realization of one’s need for God will bring about profound mourning, and bring him/her to the second step. The proud soul can only scoff in disbelief.