Home   /   And The Pendulum Swings Wide…Thoughts on Narcissism 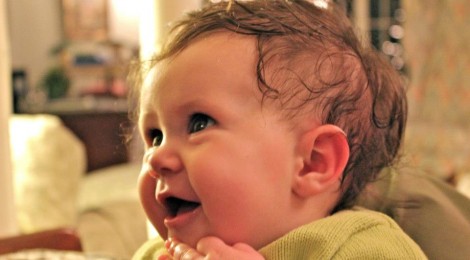 And The Pendulum Swings Wide…Thoughts on Narcissism

I carry you around the house all morning. I promise, Hillary, it seems I would sew you to my hip if I could.

I’m getting ready to leave for the afternoon and I am telling your daddy that you might enjoy some rice cereal later. He smiles. “This isn’t our first rodeo, Mama.”

I smile and gather my things to walk out the door and, as usual, it is hard.

I have learned that just because something is hard doesn’t mean I shouldn’t do it. Or, that I am not supposed to.

At a red light I send a text saying that I miss you guys already. Daddy texts back: “We are playing. Good daddy/daughter time.”

Then I let it go and enjoy the next hours that I devote to my own work outside the home.

You see, sweetie. I have a gift for you…something that has been difficult for me to give. You are the apple of my eye, but you are not the center of my world. As much as I have been tempted…out of my own insecurities… to make you, your brother, and your older sisters my everything…that is just too much pressure for any one little person.

It seems that everywhere I turn I see talk of “narcissism”. Often a misunderstood idea, I recently heard a rumor that they are taking Narcissistic Personality Disorder out of the DSM V (latest version of the diagnostic and statistical manual of mental disorders that therapists and other mental health professionals use to make official diagnoses). Why? Well, one anecdotal reason I have heard making its way around is that some research has shown that as of this year one out of every five young people thirty and under could be diagnosed as having Narcisstic Personality Disorder. So, I guess the idea is that with it being so prevalent there should no longer be a diagnosis? (I doubt this idea is the reasoning and if you read further in other places you can see that there are valid reasons for omitting this diagnosis)

Now, I am a little skeptical of such sweeping claims, but if there is even a hint of truth to the prevalence of narcissism it is concerning.

Narcissists are painfully and woundedly self-absorbed. Like the Greek mythological figure for which it is named, the disorder speaks to the fact that a person suffering at its fate is only secure if they can “look at their image in the water/mirror” constantly. The irony is that although they may seem “full of themselves” they are SO INSECURE that they must continuously feed their selves to feel ok. It reminds me of James 1:23-24. There is nothing there. They are PUFFED UP…with nothingness…empty.

In my training class to be a clinical supervisor in the American Association of Marriage and Family Therapy I heard stories from other clinicians who reported finding it more and more difficult to offer constructive criticism to the younger generation of therapists.

The inflated self of the narcissist is so fragile that it cannot handle anything poking it…like a balloon full of air…the slightest poke results in popping.

Narcissists POP in RAGE. Narcissists often rage or freak out in response to any criticism…which is why they sometimes ignore it….pretend they did not even hear you.

Narcissists often are a little paranoid…they are the star and believe others are jealous of them.  They can be conspiracy theorists with them at the center of their conspiracy theory.

Narcissists, in certain situations, can be dangerous because they feel very little remorse. They deflect and deny fault in most circumstances. They struggle to authentically empathize with others. They can share their own pain or hurt, but get antsy or even annoyed or angry if you share yours.

The causes of narcissism are varied and not fully understood.

Narcissism can result from growing up in an abusive context or a home with addicts. It can develop from having narcissistic parents…you lose yourself or never really develop a self because you grew up trying to fill up someone else. You are an empty balloon because you spent your youth being used to fill up someone else’s balloon that was empty…and the cycle continues.

Narcissism can result from being made too responsible too young or the center of a family’s existence. This scenario can play out in a variety of ways. The family revolves around everything and anything the child wants to do (sports, etc.). The child feels responsible for his or her parent’s happiness and sense of well-being. Notice that these two can go together.

I don’t claim to understand it all, but I wonder…I wonder if the latch-key generation, the generation that felt their parents cared more about work than about relationships, has responded and their response is to be the best parent EVER. “I am going to be the parent I never had.”  They interpret BEST as making everything and anything in the world about their kids…and the pendulum swings wide.

Or, I wonder…I wonder if parents look around and see a bigger world crashing in on their home computer’s doorstep via the Internet and they decide that the only thing to do is to hover closer…make their world smaller with their children at the center.

We’ve all heard these derogatory terms for mothers and fathers who are over protective. I don’t want to simplify a complex issue and there are certainly other variables at play…lengthening of the life span, harder to find jobs, growing population, social media that makes everyone a star, trophies for every participant…

I love Attachment Theory. It is a large part of my research interests. What I don’t like is when groups like Attachment Parenting International hand out just enough information to hurt parents. I just don’t think that John Bowlby and Mary Ainsworth (the theoretical parents of Attachment Theory) had in mind that parents were never to leave their kids with babysitters to enjoy a date, to never send their kids to school or some other enrichment activity, or to never sleep alone in their beds.

Don’t get me wrong. I breastfeed, “wear” my baby, co-sleep, and believe in responding to a baby’s cries. I also work and have dreams of my own that include motherhood, but other pursuits as well.  In fact, motherhood isn’t just one on a list of dreams for me. I AM A MOTHER. Just like my husband IS A FATHER. Pitting parenting against a person’s calling or passions in life is a strange idea to me.

I know that part of the “secure base” that Bowlby references means that there is enough security (read…that MOM (or caregiver) and CHILD are secure enough) for mom and baby to handle some separation every now and then. Secure enough to explore.

It does a child no good if mom is so anxious and has to spend every moment with a child to feed her own insecurities…this results in an anxiously attached child…no matter HOW much time a mother is with her child. I know…I’ve tried this.

I’ve got a long way to go myself. I have to remind myself that Jon and I need dates. That making our kids the center of our everything is not good for our relationship. That just because something I do for work inconveniences my children it isn’t a bad thing…in fact, it could be good for them. That following my own dreams is a wonderful gift to my kids. In fact, anything that takes them off of center stage for a while probably is a good thing.

I get back home from my work and as I open the front door Daddy stands in the foyer holding you facing out so you can see me. You smile and squeal with delight. I nuzzle you close.

You turned seven months old yesterday and I have to tell you…I love you so much. I love your pink skin, your sweaty curls, your chubby thighs, your giggly eyes, and your happy feet. Your smile, in worn out prose, lights up the room. Lights me up, for sure.

You are the apple of my eye, but you are not the center of my world.  I refuse to do that to you.

I won’t get everything right. I make mistakes all of the time, but I promise you this. I will do my best not to live my life through yours. I will do my best to NOT make you the center of my world. I don’t want you to feel the burden of being my source of identity. And, maybe together we can avoid this narcissist trend. Maybe if I tend to my insecurities I won’t strap them to you.  In our self-obsessed world, it will be tough…finding the balance…avoiding the pendulum swinging wide.

But, I have learned that just because something is hard…on me or even on you… doesn’t mean I shouldn’t do it. Or, that I am not supposed to.

← The Virtue of a Life Lived Small: A New Year’s Challenge in the Wake of Sandy Hook
Kingdom Gain →