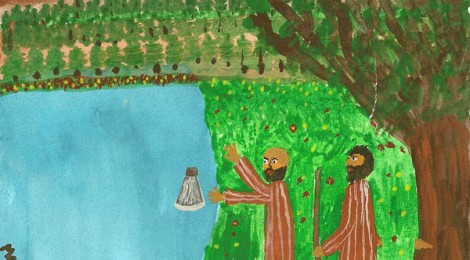 Get Your Edge Back

Now the sons of the prophets said to Elisha, “Behold now, the place before you where we are living is too limited for us.  Please let us go to the Jordan and each of us take from there a beam, and let us make a place there for ourselves where we may live.” So he said, “Go.” Then one said, “Please be willing to go with your servants.” And he answered, “I shall go.” So he went with them; and when they came to the Jordan, they cut down trees. But as one was felling a beam, the axe head fell into the water; and he cried out and said, “Alas, my master! For it was borrowed.” Then the man of God said, “Where did it fall?” And when he showed him the place, he cut off a stick and threw it in there, and made the iron float. He said, “Take it up for yourself.” So he put out his hand and took it.  2 Kings 6:1-7

When we come to the story of the axe head Elisha has become the elder. The one who had been mentored is now doing the mentoring. But it had not always been that way. Elisha had been mentored by Elijah, a relationship that culminated with Elijah’s miraculous departure and Elisha receiving a double portion of Elijah’s spirit. Indeed, the Old Testament records Elisha performing twice as many miracles as Elijah. So, the request for a double portion appears to have been answered. But what is the nature of the spirit of Elijah?

When we come to Malachi we find out that one aspect of the spirit of Elijah is the heart and ability to connect the younger generation with the older generation (see Malachi 4:5-6). That is why it is no surprise to us to learn that Elisha is spending much of his time with a company of younger prophets. By the time we come to the New Testament we find out that the spirit of Elijah also has the heart and ability to prepare the way for the Lord, in the same way that John the Baptist prepared the way for Christ (see Matthew 17:10-13 & Luke 1:17). So, it should not be any surprise for us to see some aspects of this story that foreshadow the ministry of Christ. We will come back to this second idea, but first lets look at some other aspects of this intriguing story.

The young prophets felt cramped living with the old prophet (2 Kings 6:1). They wanted to branch out and not be so limited. This is a fairly normal experience for the younger generation. They often feel constrained by the ways of the older generation, and long to find new ways that are more invigorating and life-giving for them. However, what is notable in this story is that it was in the hearts of the young prophets to not just run out and find their own way. They desired to receive the blessing of the elder. In this day and age, a time when elders are cast aside as irrelevant instead of honored as mothers and fathers, this is remarkable enough. Yet, something even deeper happens. It was in the heart of at least one of the younger prophets to not only receive the blessing of the elder, he actually desired the presence of the elder (v. 3).

The invitation for the elder to come was more than a kind gesture. It was a living out of the commandment, “Honor your father and your mother, so that you may live long in the land the Lord God is giving you” (Exodus 20:12). As the Apostle Paul noted, this is the first commandment with a promise (Ephesians 6:2). The promise is that “you may live long.” While the young prophet had no idea how the blessing from honoring his spiritual father would manifest, it certainly did come. As it turned out, the life of this project would not have been very long had it not been in the heart of the young prophet to invite the elder to journey with them.

In order to expand their area the prophets had to cut down trees, and it is impossible to fell a tree without some sort of sharp edge. Metaphorically this is true in all of our work. We must have some sort of edge in order to chip away at the obstacles that stand in the way of fulfilling the vision. With the right tools those obstacles are turned into the very resources that we will use in order to accomplish the task. Each of us has been given certain gifts to be used for the task before us. But what happens when we lose our edge?

Notice how the young prophet loses his edge, “But as one was felling a beam, the axe head fell into the water; and he cried out and said, ‘Alas, my master! For it was borrowed’” (v. 5). The young prophet was attempting to fell a beam, but it was his edge that ultimately fell. This English translation accurately captures the pun in the Hebrew language here, as the narrator uses the same word for the axe head that fell as the tree that he was attempting to fell. So it is with us. The work of removing the obstacle that would fulfill the vision becomes the trap that tries to steal the vision.

Then notice the response of the young prophet when he lost his edge, “Alas, my master! For it was borrowed.” There are two revelations for the young prophet when his axe head fell. First, he clearly understands that the work has been threatened, and so he immediately cries out in distress, “Alas!” However, there is quickly a second aspect to the revelation that comes to him, “It was borrowed!” Again, so it is with us. The truth is that all of our gifts are borrowed, but we may not be very in touch with this fact when we are working hard toward the vision. Instead, we move forward striking each obstacle with the power of our gifts. Yet, the moment that we lose our edge, that is, the strength and effectiveness of our gifts, we recognize that we have lost something that we can never produce on our own. If the prophet had the ability and resources to create his own axe head he would have been disappointed, but would have known that he could simply make a new one. Likewise, the moment we lose our edge we understand that we have lost something precious, something that we cannot replicate.

However, the elder knew what to do. Most translations say that Elisha put a stick in the water. However, the Hebrew word is more often translated tree. And although the language does not make it perfectly clear, it makes sense that Elisha, who is a type of Christ, lays down a tree the same way that Christ laid himself on a tree. In the same way that this tree becomes the recovery of what has been lost and the solution for the place of need, the work of Christ on the cross has done the same for each of us. And so we see in the story both a looking back and a looking forward. It looks back to the commands for children to honor their forbears, and looks forward to the fulfillment of all such commands in the person and work of Christ. In so doing it teaches us this: when you have lost your edge, remember that all lost things get recovered at the cross.

← For What It’s Worth: Triangles, Anxiety, and Relationships
Eyes Wide Open…Come and See →