Home   /   There’s Something About Mary 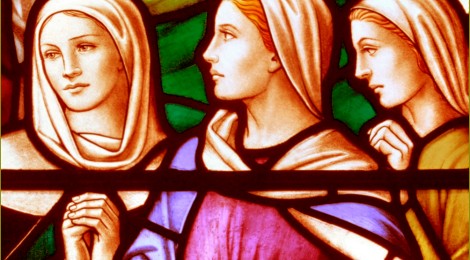 There’s Something About Mary

Emily recently wrote about Mary the mother of Jesus as a type of Christ carrier for all of us to model ourselves after. There are several Mary’s mentioned in the New Testament. Perhaps I am the only one that finds this peculiar. But there is Mary, the mother of Jesus (Luke 1:27); Mary Magdalene (Luke 8:2); Mary of Bethany, the sister of Lazarus (Luke 10:38-42); Mary the mother of James and John (Matthew 27:55-61);  Mary the mother of John Mark (Acts 12:12); and Mary of Rome (Romans 16:6). That makes six altogether. The last three are only mentioned in passing, but the first three played very significant roles in the life and ministry of Jesus. Consider those three Mary’s and what they might teach us about our relationship with Christ.

Mary the Mother of Jesus

Depending on your faith tradition Mary may be anything from nearly divine to almost despised. Unfortunatley, I hail from a tradition (Pentecostalism) that has leaned, at least slightly, to the latter. At best we have avoided much talk of Mary out of fear of Maryolatry, someething of  which we have accused our Roman Cathollic brothers and sisters from time to time. Yet, it is clear that she models much for us.

First, we learn from Mary that God chooses us. Mary was shocked at the annunciation, clearly not part of her plans for her life. This is hard on two counts. On the one hand, we can have a tendency to believe that we sought out God more than He sought us. Jesus would make this clear to His discipes when he stated, “You did not choose me, but I chose you and appointed you so that you might go and bear fruit” (John 15:16). On the other hand,  our theological categories seem to fail us in adequately explainning  the significance of being chosen by God until we have reduced it to concepts of predestination, which cause other, more troubling questions to arise. Whichever route one takes to explain these two problems it is impossible to dismiss the reality that God has chosen us.

Second, we learn that God’s work in us is mysterious and supernatural. We respond, as did Mary, with, “How can this be?” But God intends to not just bring Christ into the world, but to form Him in us. As Paul said it, “To them God has chosen to make known among the Gentiles the glorious riches of this mystery, which is Christ in you, the hope of glory” (Col 1:27). Just as Mary carried the incarnated Christ into the world two thousand years ago, so do we carry the embodied Christ into the world today. How can this be? The messenger still proclaims, “The Holy Spirit will come on you, and the power of the Most High will overshadow you…For no word from God will ever fail” (Luke 1:35-37).

Mary was called Magdalene presumably because she hailed from the town of Magdala, a name which means “tower, elevated, magnificent.” Whether the title came from her geographical origins or her spiritual status there is little doubt that she was distinguished among the disciples. Despite the fact that there is only a relatively small amount of mention of her in the New Testament much has been speculated about her throughout Christian history.

First, we learn from Mary Magdalene that Jesus intends to heal us completely from the sin that ails us. Both Luke and Mark mention that Jesus cast out seven demons from Mary Magdalene (Luke 8:2; Mark 16:9). Whether you understand the deliverance to speak of literal demons, bodily ailments, or sin issues the fact that there were seven of them speaks of the pervasive totality of the work of Christ in her life. Likewise, Jesus works to completely heal us from our bonds as well.

Second, Mary Magdalene shows us our apostolic calling as ones who are sent out to proclaim the good news of what we have witnessed. As one of the first ones to see the resurrected Christ she was sent by Him to proclaim His resurrection to the rest of the disciples (Matt. 28:7, Mark 16:9-11, Luke 24:10, John 20:2). Her role as as the first witness to the resurrection and the first sent one (apostle) after the resurrection has earned her the moniker Apostle to the Apostles. While she alone holds the distinct historical honor of being the first witness, she shows us the apostolic calling that all of us carry once we have encountered the resurrection power of Christ, which is foundational for our faith. As it is written, “And if Christ has not been raised, our preaching is useless and so is your faith” (1 Cor. 15:14).

We first encounter Mary of Bethany in the Gospel of Luke. She and her sister Martha had opened their home for Jesus and others, and while Martha busied herself with the preparations of hosting their guests Mary sat at the feet of Jesus and listened to His teaching (Luke 10:38-40). As we know, Martha tried to get Jesus to force Mary to help her with the duties of hospitality, but Jesus informs Martha that she is in fact distracted by unimportant details, while Mary has chose the truly important matter at hand (Luke 10:41-42). And so Mary teaches us her first lesson, that sitting intimately at the feet of Jesus is our first priority.

Second, Mary teaches us that Jesus is moved with compassion by those who are intimately acquainted with Him. When Mary and Martha’s brother, Lazarus has died Jesus shows up a few days too late. It is interesting to see that Mary and Martha had the same reaction. Both of them said, “If you had been here, my brother would not have died” (John 11:21, 32). However, they got two different responses from Jesus. Martha, the dutiful one ever worried about proper hospitality was first to come out and greet Jesus, and she got a beautiful lesson on the resurrection (John 11:23-27). Perhaps Mary had learned the lesson of the resurrection while sitting at the Master’s feet, because when Jesus saw her tears He skipped the lesson and went straight into action. Then came one of the most astonishing scenes in the New Testament in the form of the shortest verse in the bible. We are simply told, “Jesus wept” (John 11:35). Mary’s intimate relationship with Jesus did not illicit action from Him that would not have taken place. He was going to raise Lazarus from the dead either way. However, her intimate relationship with Jesus did evoke the care and compassion of the Creator of the Universe.

Third, we learn from Mary that we are called to glorify God. Immediately after the story of Lazarus we are told of a meal where Mary anointed the feet of Jesus with expensive oil, one of at least three similar encounters Jesus had with His female disciples. In her worship she prepared Jesus for the act through which He would be glorified, His death on a cross. Judas was critical of the act as wasteful, but Jesus defended Mary once again, and the fragrance of her worship filled the room (John 12:3).

So, we learn from these three Mary’s seven lessons about out our relationship with God.

Go and be a Mary today.

← Verify
For What It’s Worth…Irrational Beliefs →