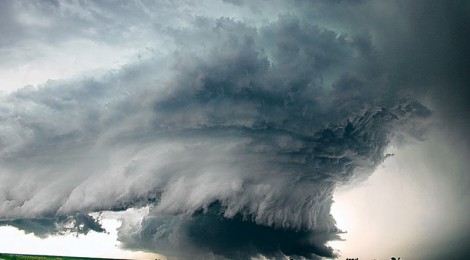 People do not often tell me about dreams that they have had, but when they do there is a pretty good chance that there is a tornado in it. I heard about someone’s tornado dream for the first time fourteen years ago. It was such a vivid and striking dream that it captured my imagination, but I had no idea that it would be the first of scores of such dreams reported to me. There has rarely been any prompting to tell such dreams, and really no context at all. I will simply find myself in a conversation where someone will suddenly say, “I had the strangest dream the other night.” I have no idea what to make of this phenomenon. However, it has had made me wonder just how common tornado dreams might be. I can rationalize an increase in tornado dreams since April 27th, 2011. But what about all of the ones prior to that sad day?

Anyway, yesterday I received an email from a friend with a dream attached. And of course, there were tornados in it. I asked her for permission to share it, and you can read it below.

I want to try something here. I am putting out a call for tornado dreams. Have you ever had a dream with a tornado in it? Do you know of someone else who has? If so, would you consider sharing it with me and letting me put it here on the blog? I would like to put your name and a date on it. But if you would rather me not put your name on it that is fine. I will start a collection that will be archived on a drop-down menu above under the tab jonathan’s blog. If you are willing to help me please use the contact form found by clicking the contact tab at the top of the page. If you are willing to put out an all call for such dreams on your Facebook, Twitter, etc. that would be great. I am especially interested in dreams that have both tornados and churches in them, but will take any tornado dream.

Thanks for your help with this. If you have any thoughts on the dream below please share them in the comments.

There was an outreach going on in the heart of a large old city. It had tall multi-level buildings and old brick houses. All the buildings were in disrepair. In the middle of the city was an old really run-down white brick church. The building was our church but it was really run down so only workers and children used it. And out on the lawn our church was doing an outreach or bible study and there were children everywhere responding to it. We were feeding them, clothing them and teaching them God’s word. The adults were just out shopping and doing their daily business, not really messing with us because they said the church is irrelevant and it is a place to take care of our children so that we don’t have to be bothered and we can live our lives. They didn’t despise their children, just didn’t really have time for them. But they did despise the church, even though they left us alone.

The outreach was over and I started walking through the city I was witnessing to a young person (teen or young adult). He was running from some other older young people who were trying to jump him into their gang. I was trying to help him, but I was also trying to get home to my parents and sister and her family. Then the tornado sirens went off. So I convinced the kid to run with me back to the church to take shelter.

The workers were gathering the children into the church and we ran in. There weren’t any adults in there except the other church workers. The church had a basement but it was just a hole that was cut into the floor and it lead to a space cut out of the earth, so no one went there we all just filled the old church and looked out the windows as multiple black tornadoes ripped through the city. One tornado came at us and the church started spinning and twirling through the city. I saw buildings fall all around but the church building was still in one piece being pushed and knocked through the city. The building that were falling were old and in disrepair but they were newer than the church and they looked stronger than the old white brick church. Then it stopped and some more children and a few adults that had survived the first on-slot of tornados came into the church.

Then more tornadoes hit. One reached down inside the church. It didn’t rip off the roof or walls, it just reached inside. It came at me and tore up a false floor where I was standing, but I held onto a rope attached to the real floor and it just ripped up a space of false floor and then lifted going back to destroy other buildings outside. Then the storm ended and we went outside.

No one in the church was lost and the old church was still standing. Not even a window was broken out of it. The other buildings were just destroyed and people who had survived started coming out. But there was a rash of looting and steeling and the people were trying to get everyone to join in, even me but I wouldn’t. I was hungry like everyone else but I would not steal to get food or even a bicycle to ride home to my parent’s house. Eventually I was able to talk to them, but not see them (my parents). And then I started helping gather people and children back to the church and to care for any of the survivors that would let us care for them.  Then I woke up.

← Rest and the Other R-word
…Is not overly sensitive →