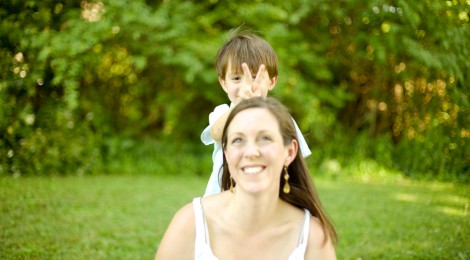 There is something incredibly intimate and sweet about being on the floor with your child…getting down to their level and playing with them in their own world of their things.  Emmett will pull on me with his soft, small hand and say: “Please, mommy, please, come play cars with me in my room, mommy, come on!”  I’ll let him pull me back to his train table where we can set up roads and railways and play with his vehicles.

Last night I sat down to play.  I vroomed the cars down the tracks complete with corresponding car noises.  I noticed Emmett had stopped.

So I had the cars talk to each other.  I had my car ask Emmett’s car what his name was.

Emmett stared at me again.  He humored me for a moment, answering back. Then he stopped again.  “Mommy.  Just PLAY.”

So I had the cars dance and be silly.  He thought that was worth a few laughs.  But, when I continued this charade, he stopped and stared again.  “Just PLAY, MOMMY.”

And, that is when I think I got it.  I think I understood what he wanted.

So I started having the cars run into one another, revving their engines, ramming one another into rolling pieces of metal, what I would consider fighting, causing wrecks and a big mess….something I’ve seen Emmett do many times.

Emmett’s smile lit up his face and I knew then that I was really playing with him.  We played and he hugged me: “I love you SOOO much, mommy.”

He wanted to be close to me.  He wanted me to fight.

Our society is not always good with the show of emotions…especially anger or sadness.  It is in the heat of those moments that we reveal parts of ourselves that most people do not see and do not want to see….parts we prefer to hide.  When we get angry we expose our vulnerabilities.  We are exposed…seen.

One thing is certain: in an honest, open argument where truth and vulnerability reign, you really face each other.  You get close.  Like in wrestling, you get close enough to smell each other’s sweat, maybe even have it run down on your own skin.  The silent treatment doesn’t count.  That’s not honest wrestling. You can’t fight with your back turned.  And, facebook, texting, and twitter don’t count either.  You must be willing to be seen, be willing to be smelled and held and to get messy.

I don’t like wrestling.  I cringe when I watch it.  I played tennis.  You stay WAYYYY over there and I’ll stay here and if I get upset I might even throw a little tantrum to myself, but I don’t want to have you involved in it.

Yes, wrestling makes me uncomfortable.  I don’t really want your sweat rolling down onto my own skin.  I don’t want the smell of you or the mess.

The problem is that I think God created us to wrestle.  In fact, I am pretty sure God is a wrestler, too.

I know of a wrestler in the bible…a man who was angry, a man who wanted answers.  We don’t usually think of him as being angry or wanting answers or being a wrestler. Our flannel graph bible stories seem to skip over that part.  We like to think of him as patient and long-suffering.  The only problem is that when we skip over this man’s anger, frustration, and his fight for answers we skip over, oh, about 38 chapters of the bible.  I have a problem with that.

You know the story of Job.  I don’t have to tell you how Job ended up in despair, but just remember that in the end Job went from being the wealthiest man in the land with many children to losing everything including his own health.  He sat with boils covering his body, covered in ashes and in Job chapter three we find him having an old-fashioned pity party.

We read that when Job’s three friends heard about what had happened that they all came together to sympathize with him and comfort him.  Verses 12-13 tells us: “When they lifted up their eyes at a distance and did not recognize him, they raised their voices and wept.  And each of them tore his robe and they threw dust over their heads toward the sky.  Then they sat down on the ground with him for seven days and seven nights with no one speaking a word to him, for they saw that his pain was very great.”

Job’s friends get such a bad rap.  I don’t know about you, but I hope I have one friend who would be willing to weep and sit with me for one day.  Job had three friends who wept, tore their clothes, and sat with him for seven days.  These were not bad friends.  They obviously loved and cared about Job.  They may have not been the wisest friends, but they were not uncaring.

If you really take time to read the words of Job’s friends you might be surprised.  Most, if not all, of their words hold truth.  They give good advice.  They demonstrate great knowledge about God.  However, Job does not need advice.

The big question has always seemed to be: “Did Job sin?  Did he remain faithful?  Did he let Satan get to him?”  We find this answer in two different verses.  Job1:22 states: “Through all this Job did not sin or did he blame God.”  Job 2:10 states: “In all this Job did not sin with his lips.”  That is the focus of our flannel graph stories.  That is the lesson we learn.  Job went through a lot.  He never gave up.  He sat there through it all and took it.  He was abused and through it all never sinned.  Then everything was better.

Lesson learned.  Story over. Happily ever after.  Suck it up and take it.

In verse 3:3-5 Job says: “Let the day perish on which I was to be born, and the night which said, ‘A boy is conceived.’  May that day be darkness; Let not God above care for it, nor light shine on it.  Let darkness and black gloom claim it; let a cloud settle on it; Let the blackness of the day terrify it.”

Ok, in this day and age, if someone said that to me I would start taking steps to call 911.  I would be afraid of what he might do to himself.

Job is saying that he is going to be honest.  He is not going to hide himself.  He is going to risk vulnerability.  And, not just with anyone…with God.

“What is man that You magnify him, that You are concerned about him, and try him every moment?  Will You never turn Your gaze away from me, nor let me alone until I swallow my spittle?  Have I sinned?  What have I done to You, O watcher of men?  Why have you set me as Your target, so that I am a burden to myself?” (Job 7:17-20)

Job is fired up mad at God.  I don’t know how else to read these verses.

Job’s friends are aghast at how he is talking to God.  Perhaps, we, too, are a little uncomfortable with such raw emotion.  We may be uncomfortable and feel that Job is being disrespectful.

One thing is certain.  God shows up.  God does not seem afraid to fight.

In Job 42:7 God says to Eliphaz, one of Job’s three friends: “My wrath is kindled against you and against your two friends, because you have not spoken of Me what is right as My servant Job has.”  One of my professors at seminary, Dr. Rickie Moore points out something about a tiny word in this verse.  Do you notice the word “of” right before the word “Me”?  The verse says that God is angry because Job’s friends have not spoken “of” God as Job has.  Dr. Moore, a Hebrew scholar, says that this word in the Hebrew is more often translated as the preposition “to”.

One little word can make a very big difference in such a sentence.  Read it again after this seemingly minor change.  “My wrath is kindled against you and against your two friends, because you have not spoken to Me what is right as My servant Job.”  If these two words are interchangeable in the Hebrew language, then the meaning of the verse seems clear.  Job did not just talk about God, as his friends did.  He talked TO God.

His friends wanted to play tennis.  Job wanted to wrestle.  And, God liked that.

God knows that when two people are wrestling they are very close…close enough for sweat and body odor and messes.  Close enough to work things out.

My husband is the youngest of four boys.  You can imagine that with four boys in a household there were a few fights…probably some wrestling, too.  From my husband’s recollections the conflict with the greatest amount of heat was between him and his next oldest brother.  As you can imagine they have some stories they can share.  The irony is that now Jon and this brother are the closest in proximity to one another, living in the same town, have a lot in common, and are very good friends.  The truth is that fighting can be good for a relationship.  Fighting and wrestling does not have to be a bad thing.  It just might end with a hug and someone saying “I love you soooo much!”

I wonder what would happen if we understood that being there for each other sometimes means getting down on the floor, at their eye level, in their own messy world, and rather than playing cutesy, silly games…being willing to fight, to wrestle…to have our sweat and their sweat mix together…to tolerate the smelly, messy part of being close.

So, this week, don’t go pick a fight, good grief, but don’t shirk from one either.  Boundaries and niceties and appropriateness are all fine and good…AND I think that there are relationships that could grow from some more honest fighting…some more wrestling…some more tolerating imperfections and vulnerability. Maybe the first one that could use some wrestling is yours with God.

I just think He loves to wrestle.  He might make a wrestler out of me yet.