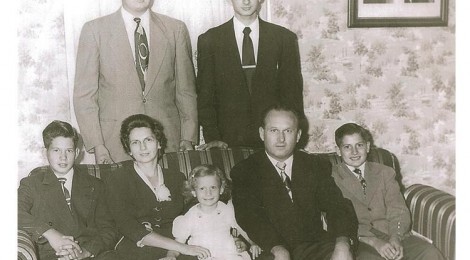 Eloise Stone with her husband and five children.

Today I bury my Grandma, Edna Eloise Stone. She would have soon turned 97. She lived a long and fruitful life, had 5 children, 13 grandchildren, 22 great grandchildren, hundreds of spiritual children and thousands of people who were touched by her life. She was strong to the end, and died peacefully in her sleep. In other words, there is nothing I can complain about. Who could write a better script?

Edna means “pleasant.” In many ways that describes Grandma perfectly. All ninety pounds of her. She was kind, soft-spoken, thoughtful, and cheerful. She quietly and faithfully supported her husband, a gregarious and boisterous coal-miner-turned-Pentecostal-preacher, and his work as they pastored in southwest Virginia for over four decades. She was proper to the hilt, and balanced his sometimes boorish ways. She was indeed pleasant. She was known for it.

However, she was not known by Edna. She went by her middle name, Eloise, which means “famous in battle.” What some people never saw about her was that in many ways it was her, as much or even more than my Grandpa, that was the strong one in the family. She was a fighter. All ninety pounds of her. She fought her share of battles in life, but in my family there is one story in particular that brought her fame. This is the story that made her famous in battle:

Eloise nearly collapsed at the front door. She was relieved to have gotten her husband and boys out the door, but overwhelmed by the exhaustion in her body. As her family walked to church she could only crawl back to bed. It now seemed that this strange illness would last forever.

It had only been a few weeks earlier that she was standing in front of a congregation testifying that God had miraculously healed her in a revival service. Before her healing she had battled for months. Despite the myriad of tests and consultations that several different physicians had tried on her no one had any answers. But God, the Great Physician, had healed her in an instant. The whole congregation had celebrated with her. But now, just a few weeks later, she could barely even get out of bed.

As she pulled herself back into bed she felt shame, embarrassment, confusion and condemnation. She thought she had been presumptuous in testifying that she had been healed, and felt like an outright liar because of it. As the condemnation escalated in her mind her room grew cold and dark. She did not recognize the strange presence in the room when she first heard the voice.

She could not refute it. Everything appeared to confirm the undeniable fact that she was still not healed from the mysterious illness that had been plaguing her. The moment she acknowledged that she heard the voice again.

“Wow. I guess that’s right,” she was surprised to realize.

“You’re not filled with the Holy Ghost because you’ve lost your sanctification,” the voice responded.

This was a tough pill to swallow. She had been Pentecostal for quite awhile, but before that she was a God-fearing Methodist. Sanctification ran deep in her. The more she thought about it she began to realize that she had been a little short with her husband, even snapped a few times at the children. She was shocked at the revelation, but had to admit that she had lost her sanctification. This realization had become almost more than she could bear. The room grew darker and heavier. It was getting difficult to breathe. She was choked by shame.

“You lost your sanctification because you’re no longer saved. God doesn’t even love you anymore,” the voice offered. And it was at that moment that something snapped in her mind.

“Wait a minute,” she sat up and exclaimed. “I know that God loves me. And if God loves me that means He saved me.” Something seemed to break in the atmosphere. She could feel strength in her body that she had not felt in weeks.

“And if I’m still filled with the Holy Ghost that means you’re lying about my healing. I rebuke you in the name of Jesus Christ! I am healed!”

And at that she jumped out of bed and began dancing around the room, speaking in a strange and heavenly language.

I imagine her like a brave Lakota warrior after a coup. Tribal. Powerful. Mystical. I can see her dance in slow motion. Her eyes are closed. Her head is swaying. Her chant is guttural. I am mesmerized by the scene. I am captivated by its primal nature. The Spirit seems so other-worldly, yet terrifyingly near. My spirit aches to be enraptured with her. But I can only watch in awe as the tiny warrior dances around the fire of God.

She is Eloise, famous in battle. Today we put her tiny body in the ground, but her fighting spirit lives on.