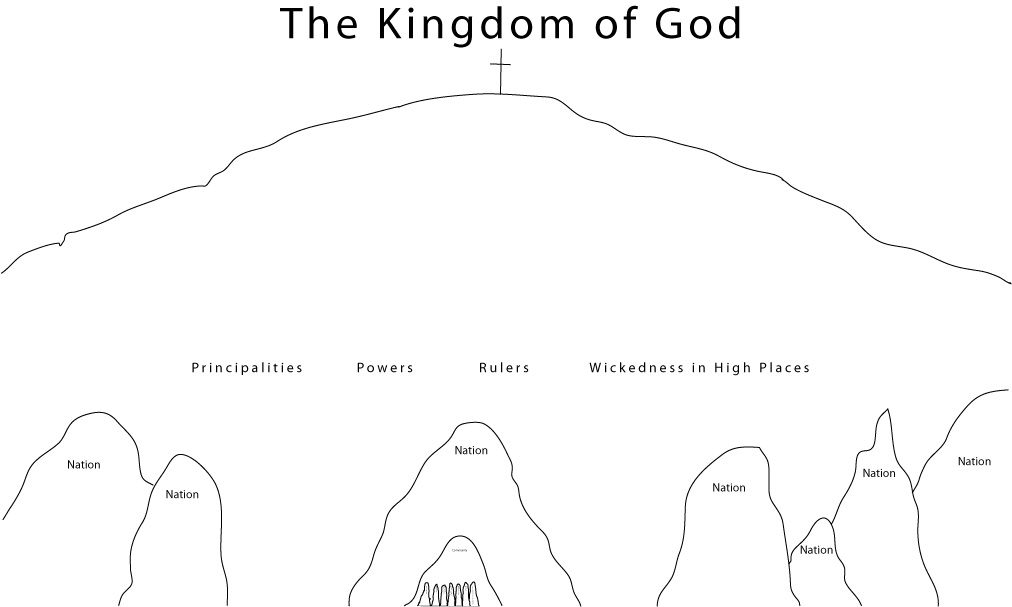 In this 12-minute screencast I share a model for seeing and understanding all that takes place in the world, both seen and unseen, and how we all fit into the purposes of God both individually and corporately. When the model is seen it becomes clear that everyone has both value and purpose in God’s plan of redemption. It is a cosmology of sorts, and speaks to both the missio dei (mission of God) and missiones ecclesiae (mission of the church).

I know that some may find themselves in a situation where they cannot view the video. I will post the transcript below. But I confess I do that with some hesitations, as I do not think the transcript captures the point without the visual. So my hope is that if you need to read the transcript now you will find time to come back later and watch the video in order to see how the model develops.

From time to time you will see where a scholar in the social sciences, often sociologists, will break down society into a number of areas. The total number will vary, sometimes four or seven or twelve or seventeen. And the areas chosen are obviously going to vary as well. I want to start with one such model, and I am choosing to use one that has been called the seven mountains. I have chosen this particular one because it did not come out of scholarship. Rather, it came from three different Evangelical leaders in the seventies: Francis Schaeffer, Bill Bright and Loren Cunningham. Each of them produced almost identical models around the same time without conferring with one another, and each case it was something that they felt the Lord laid on their heart. But whichever model you prefer to use here is an important point: It is possible to look at all of civilization, all goods and services, all transactions, all that humans endeavor and exchange at any given point on any given day and break it down into some similar model.

Now, if you google “the seven mountains” you will probably pull up a lot of paranoid talking heads that say this model is dominionism. That people that talk about it want the church to take over Hollywood and Wall Street and Pennsylvania Avenue. There are dominionists in the world, but I am not one, and I have never met a believer that talks about the seven mountains that is one. So, don’t read too much into the use of the model here.

So, in this model we are looking at society in light of seven mountains. You can see here that we have:

They do not go in any particular order. I probably put Religion first because I myself work on the mountain of Religion. In fact, that is me there hanging out. You could break this down other ways. You might wonder if Health Care should have it’s own mountain. It very well could. In my mind here it is kind of a blend between the mountain of business and the mountain of education, since all preventative medicine is essentially education, and of course it is a business as well.

However, this perspective begins to change if I will step back and take a different perspective on things. So lets scale this picture out a bit

And we begin to see that what appears to be isolated mountains that are worlds apart are actually part of the foothills that make up the single mountain of my city, county and/or community. I live in Bradley County, Tennessee. So, we will use that example. All of the various sectors or spheres and vocations come together to make up this thing called Bradley County. Now I know that God has called me to scale the mountain that I am on. But I also know that God has called others to scale and influence the mountains that they are on. And while we may feel like we are worlds apart the truth is that these things are all integrated as part of what people do, and as part of what God is doing, in Bradley County. Some people get to the top of that mountain. And when they do they have some very real power, whether that is a good thing or a bad thing.

But of course there is a bigger perspective in the world than Bradley County. So, lets scale back a little bit more.

Now we see that all of the communities actually blend into one another to make up the entire nation (this of course, is not to scale. Ha!). But you get the point. We could draw in thousands and thousands of communities and it would make up the nation. There are people that get to the top of this mountain, and their power is very significant. Here we are talking about the people that control things like Washington DC, Wall Street, Hollywood, etc. And of course there is more to the world than America. So if we kind of scoot back and forth here we will see some other nations as well. But there is actually a bigger perspective here. So lets scale back even farther.

Ephesians 6 tells us that we are not fighting against flesh and blood, that is, against people. Rather we are fighting against Principalities, Powers, Rulers and Wickedness in High Places. They are like a dark cloud that hangs over the nations, over the power spots in the world, trying to influence the world for evil. The good news is that this is not the biggest perspective. So we are going to back one more time.

Now we begin to see the world as God sees the world. Through the Kingdom of God. In Matthew 28:18 Jesus said, “All authority in heaven and on earth have been given to me.” And of course He goes on to make disciples of all nations. And Ephesians 1:20-21 says, “With the same power he exerted when he raised Christ from the dead and seated him at his right hand in the heavenly realms, far above all rule and authority, power and dominion, and every name that is invoked, not only in the present age but also in the one to come.”

So, what are the implications here:

1)    There is no annexed land. We tend to act as if there are little Las Vegases in the Spirit world. You know, places that sort of hide off the map. Places of escape, where we can say, “well whatever happens in Vegas stays in Vegas.” As if it is one place that God will not go. But as you can see from the model. Everything comes under the umbrella of the authority of Christ. Perhaps we would like to have a place where we could get away from God, but the reality is that we can’t. Anywhere we go, not only is God there, but it is part of what God is doing. It is part of His plan of redemption. Which leads into point two.

2)    There are no secular callings. Since God is actively involved in everything that is happening everywhere you cannot outrun or escape a Kingdom Calling. Certainly God calls people to specific things, and you can run from that specific calling. But you cannot leave an area of sacred ground in order to pursue an area of secular ground, because…again, “The earth is the Lord’s, and everything in it.” And that brings us to the third point.

3)    There are no useless individuals. I may not have drawn a very good picture here. But it represents everything that is. So, you are on here somewhere. Remember when we started this thing in Bradley County you could see me pretty good. Now I am barely even a dot on the map. BUT I am there! And that is significant. I belong to what God is doing in the world. I like to think of it this way. Scientists refer to organs in the human body that appear to have no real function as Vestigial Organs. In the late 1800’s scientists had hundreds of organs listed as vestigial organs. Today, less than 150 years later, we are down to about three remaining candidates: the appendix, tonsils, and some redundant veins. As scientist discover more about the human body they are discovering purpose for each organ, even those that appeared to have no purpose. One of the more recent organs to lose its vestigial status was the spleen, which, as it turns out, produces much of the body’s monocytes that are critical in nursing the body back to health in the case of a heart attack. Even the appendix is now believed to play some sort of role in the immune system. In fact, many scientists are letting go of the concept of vestigial organs. But whatever the case is in science. This we know for sure. There are no vestigial organs in the body of Christ.