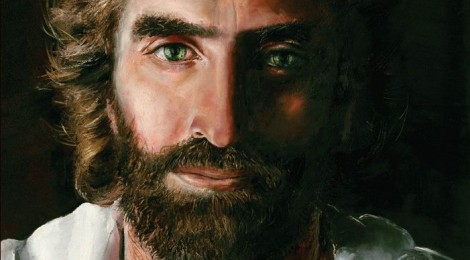 Painted by Akiane Kramarik at age 8. Learn more and view her gallery at akiane.com

The Word in the word

There are three passages in the Gospel of John that bring home a very important point:

In the beginning was the Word, and the Word was with God, and the Word was God. The Word became flesh and made his dwelling among us. We have seen his glory, the glory of the one and only Son, who cam from the Father, full of grace and truth. John 1:1,14

You study the Scriptures diligently because you think that in them you have eternal life. These are the very Scriptures that testify about me, yet you refuse to come to me to have life. John 5:39-40

Jesus performed many other signs in the presence of his disciples, which are not recorded in this book. But these are written that you may believe that Jesus is the Messiah, the Son of God, and that by believing you may have life in his name. John 20:30-31

Most of the time that you hear a Christian refer to the word of God they are referring to Scripture. However, the point that John makes in the very beginning of his gospel is that the clearest statement God has ever made in revealing Himself to His creation is through the revelation of Jesus Christ (1:1,14). Someone could memorize the entire Scripture, but if they missed Jesus Christ they would have missed the whole point (5:39-40). And the whole point is to have the life that He came to give, which happens when we believe that He is the Messiah, the Son of God (20:30-31).

I came to know Jesus near the end of my time at college. As a person who had been raised in church I had all of the information that I needed, but I did not know Him. The Scripture was dead to me and He was dead to me. I lived my life driven by my own selfish desires and had no guilt about that. I was totally lost, and inside I was dying. One day I walked into a class to hear a guest lecturer speak on the authorship of the book of Deuteronomy (what I was doing in that type of class is another story for another time). I sat down on the back row of the classroom, pulled my hat down low, stared at the table in front of me, and thought I might not make it any further. It was probably the closest thing to an authentic suicidal thought that I have ever had before or since.

What happened next is hard to describe, as words do not do it justice. It was as if Jesus Himself walked up behind me and grabbed me by the nap of my neck. I was arrested. I could not move. I could not look up. I could not really hear the discussion going on in the classroom because of the fear of the Lord that gripped my heart. It was overwhelming, but it was also the most meaningful awareness of the presence of God that I had ever experienced in my life. I did not want Him to let me go. But I also was uncertain how long I could handle His presence. There is a Hungarian proverb that goes like this: God has feet of wool and hands of lead. We cannot hear Him coming, but there is no doubt when He takes hold. I was living that proverb.

A funny thing happened that day. That type of experience is where most people give themselves to the Lord. They pray a prayer of repentance and confess Jesus as their Savior. I did not do that. Instead I told Him that I would do whatever it took to find Him. At that moment I think that both He and I were pleased. He awakened me. And now the chase was on.

The Road to Emmaus

One of the final stories in the Gospel of Luke tells us about two disciples who were walking on the road from Jerusalem to Emmaus, about seven miles altogether. They were dejected over the death of Jesus, and confused over reports that His body was now missing from His tomb. While they were walking Jesus Himself came up and walked along with them, “but they were kept from recognizing Him” (Luke 24:16). Jesus asked them what they were talking about, and they told Him all that had happened in the last few days. Then Jesus explained to them from Moses and all the prophets all the Scriptures that concerned Him (24:27).

As they approached their village Jesus continued as if He was going further, but the pair of disciples urged Him to come stay with them. So, He went in with them and when they were at the table He took bread, blessed it, broke it, and gave it to them. At that moment their eyes were opened and they recognized Him, and He immediately disappeared. They asked each other, “Were not our hearts burning within us while He talked with us on the road and opened the Scriptures to us” (24:32)?

All of us have experienced seasons where we felt dry. When we were downcast, unsure of the events that were taking place around us. Times when we could not make sense of what God was doing. Times when we opened the Scripture, yet could not understand the words–and more importantly, could not find the Word. If that is you today consider your Emmaus road, that moment when your heart burned within you just before He opened your eyes to see that it was Him. And then dig into the word of God until you find Him. You might be surprised how quickly the living water springs up in the desert, and how good it feels to have your heart burn within you once again. Most importantly, you might find more than refreshing ideas. You might find Him.

← For What It’s Worth… Loss
Cosmic Calling →