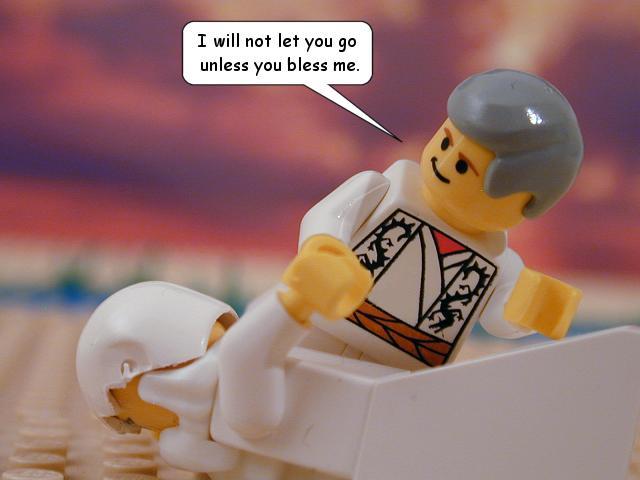 I remember wrestling with my father as a child. It was something that I loved to do. He would get on all fours on the floor and I would plow my shoulder into him as hard as I could, just certain it would knock him back if not knock him over. Of course, I could not even get him to budge, and that never ceased to amaze me. There was something magical about pushing against him with everything I had only to learn that he held a power much greater than my own. After a few attempts he would swing his arm around and swoop me up by one ankle with his big paw of a hand. I would flail around before he finally pinned me to the ground. He would eventually let me up again and we would start the process over, laughing and giggling the whole time.

Now I get to experience the same joy with my own children. I am the one that holds all of the strength and they are the ones amazed at my power. Now that I am on the other side of the wrestling match I can see something that many people often miss. That is, there are few things that are as intimate as wrestling. Yet, when we think of the most famous wrestler in Scripture the word that comes to mind is probably not intimacy.

Jacob most likely means “heel grabber.” When he is so-named because of the way he was holding onto Esau’s heel at birth, any other implications of his name are not immediately clear. However, as we read about the events between his birth and his divine wrestling match things begin to clear up quickly. Jacob supplanted Esau by stealing his blessing as the oldest son, and deceived his father in doing so. He fled from Esau only to find himself “wrestling” with Laban, and then Laban’s servants. He struggled with his wives and children. In all of this he never seemed to fail to miss an opportunity to seize things for himself. Jacob does not appear to be one pursuing intimacy. Instead, he seems to be self-serving and divisive.

Yet, something interesting happened to Jacob when he was alone in the desert one night. Most of us know the story of Jacob wrestling with the Angel of the Lord. He wrestled with a divine being that had the appearance of a man. Although Jacob could not overpower his opponent he refused to let him go until he gave him a blessing. It was the same old Jacob, the tenacious, bulldog-of-a-man who is looking to increase his own personal blessing. Yet, he could have never imagined the blessing that he was about to receive!

Just like the Angel of the Lord with whom Jacob wrestled that night, his struggles had the appearance of man. Yet, God had been working through those struggles in order to bring Jacob to this moment. His wrestling culminated with a match that ended with the revelation of God’s hand in his life. It’s as if God said to Jacob, “You thought you were just wrestling with man, but you were in fact wrestling with me.”

This revelation of God’s proximity brought about a transformation in Jacob’s life. He was never again the same. He named the place Peniel, which means “face of God.” He realized that he had quite literally faced off against God, and yet God had spared his life. And I would purport that God had done more than spared his life. He had in fact engaged his life, and did it in the most intimate of ways.

Perhaps you have been wrestling. Your opponent may take the form of life circumstances, work challenges or human relationships. Whatever the case may be, you can be assured that God is engaged in it. He may be about to deliver you from your enemy. However, he may reveal to you that he is actually the one with whom you are ultimately wrestling. In either case he intends to use your struggle in order to bring about the transformation that comes when you overcome in your struggle with God and men. And in either case you can rest assured that your father is intimately close to you, even when he is wrestling against you.

Leave a Reply to ginaree Click here to cancel reply.